An electrical arc flash is an unplanned and ongoing explosive discharge of electrical energy which flash erupts in an arc formation.

An arc flash event is a serious risk to anyone working with or around live electricity. As well as being able to cause death or life-changing injury, arc flashes are extremely damaging to electrical equipment. Being so powerfully destructive it is little wonder that legislation and regulation exist throughout the world to reduce and protect from electrical arc, or arcing, incidents. 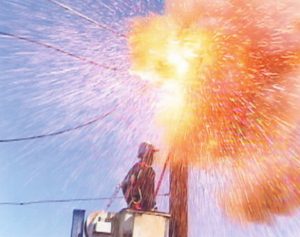 Electrical arc flashes, which can also be known as flashovers, result in an immense and immediate release of electrical energy. Manifesting themselves as an explosion of literal shock and awe they are a direct result of a short circuit between:

In the event of an arc flash there is a sudden release of ionised gas and electrical energy which produces a blindingly bright curve of light and a deafening explosion. The discharge of energy is so immense that it produces a plasma cloud and:

The resulting explosion from an arc flash can cause conductors such as copper to be entirely vaporised and equipment to be shattered into shrapnel which can tear through any surface.

The explosion from arcing is violently brutal. With a terrific shock wave blasting off from the epicentre: the ultraviolet light; shrapnel and heat that escapes can cause anyone in the vicinity to be injured. Death can be a result. Even if an incident is not fatal people are also at severe risk from permanent damage including:

Serious psychological damage can also be caused. This is particularly the case in an arcing event which has resulted in the death of someone or a life-changing injury to self, colleagues or anyone else.

Arc flash incidents only take place while work is being carried out to an electrical system which is still live. Anyone that is working on the system or working near the energised system is at risk.

Though most arc flashes take place in a professional or commercial environment the risk is still present at home; despite the lower flow of energy. The energy produced in an incident is not necessarily linked to the voltage coming into the conductor. Where there is a lower voltage, for example, there can still be a high current held and insulated throughout the system. Once the short circuit occurs a higher amount of energy can be discharged despite an otherwise low current.

In most cases where flashover has occurred it is when the system being worked on was thought to be dead. It is imperative to check that this is the case before work commences therefore. Where a system or electrical equipment is not able to be switched off or de-energised qualified and trained staff should wear high quality and appropriate personal protective equipment.

Throughout the world health and safety legislation and regulation imposes strict obligations on working with the supply of electricity and power supplies. Recognising the dangerous power of arcing there are certain requirements that need to be met to protect against incidents, mitigate their damage and reduce the likelihood of them taking place in the first place.

Typically, companies working with electrical supply and at risk from arc flashing will need to prove:

In the workplace these protections contribute to making offices, shops and commercial premises as safe as possible. In the home though it is vital to ensure that all electrical appliances are safe and fit for use and that any electrical work is carried out by a trained, qualified and regulated professional.

No comments yet. Be the first!